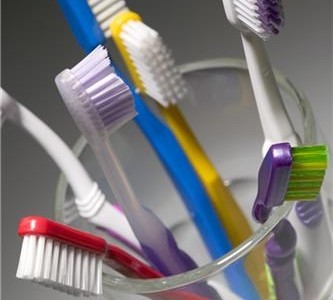 People love to share. It is generally a good habit, encouraging generosity and discouraging selfishness. However, there are some things that should be kept to oneself, and according to the British Dental Health Foundation (BDHF) a toothbrush comes somewhere near the top of that list.

Sharing a toothbrush might seem harmless, particularly when it is a partner’s. After all, many people will happily eat off another’s fork or spoon, and kissing someone will always involve a small exchange of saliva; surely sharing a toothbrush is no different to these practices?

However, in actuality the habit is a very bad one to get into. When brushing their teeth, people’s gums will often bleed a little bit. By sharing a toothbrush, this blood also gets shared along with the saliva, and this can be dangerous to the health. It may seem a little disgusting, but it is true.

A survey of around 2,000 people, conducted by the BDHF as part of National Smile Month, found that almost a tenth (9.7 per cent) of Britons have shared a toothbrush. Another 11 per cent said they would be willing to do so if they needed to.

Dr Nigel Carter, the BDHF’s chief executive, spoke out against the practice. “Sharing a toothbrush leaves people susceptible to all sorts of oral and general health problems. There are many hundreds of different bacteria and viruses in our mouths and people sharing a toothbrush could be passing these on to others,” he said.

However, this is not the only bad oral health habit the UK public is guilty of. The study also found that around ten per cent of Britons have used something other than toothpaste to clean their teeth with, while one in five had access to toothpaste but used their finger instead of a brush.

Perhaps more worryingly, one in seven admitted to using household items such as business cards, credit cards and earrings to clean between their teeth. Furthermore, almost 40 per cent admitted to rinsing their mouth out with water instead of brushing their teeth. It seems the UK is in dire need of a lesson in good oral health practices.