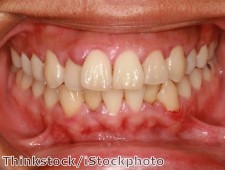 A new survey has found that many people would rather bury their head in the sand than go to their dentist regarding changes to their gums.

According to the study by MailOnline, just 19 per cent of people questioned would act if they noticed anything different about their gums, compared with 46 per cent who would pay a visit if they experienced difficulties with their teeth.

Nearly half of the respondents also admitted that they had never actually spoken to a dental professional about the health of their gums.

According to the NHS, 15 per cent of people will suffer severe periodontitis, which is the most destructive form of gum disease and can result in tooth loss.

It is also estimated that half of all adults have at least some degree of gum disease, although it is rarer in children.

The survey found that 41 per cent had found their gums to be bleeding as they brushed or flossed their teeth, but a third said that they thought that was just a result of brushing too vigorously.

Another symptom of the condition is bad breath, which is often a warning sign of gingivitis – the early stage of gum disease. This is caused by a build-up of plaque around the teeth and gums which should be removed when brushing.

One way to help patients avoid gingivitis from developing further is through effective dental marketing. Dental posters, for example, can be displayed in waiting rooms to educate people on how to effectively look after their gums.

Another finding was that only two out of five people admitted flossing regularly – despite the fact that cleaning properly between the teeth is an effective way of protecting against gum disease.

Further protection can be achieved through the use of a daily mouthwash – of which products containing chlorhexidine are among the most effective.