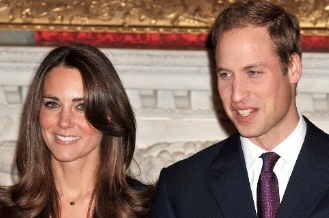 A new poll has found the Duchess of Cambridge has the most appealing celebrity smile, with This Morning presenter Holly Willoughby placing in second in the study.

Dancing on Ice host Willoughby, who previously won another poll on celebrity smiles, was in second place shortly behind the Duchess.

Reality TV star Kim Kardashian, who is currently dating rapper Kanye West, came in third in the list of the most attractive celebrity smiles, while the top five was completed by former England footballer David Beckham and singer and X Factor judge Tulisa Contostavlos.

Simon Cowell, Katie Price, X Factor judge Louis Walsh and reality TV star Amy Childs were all named by the website as having the worst celebrity smiles and a participant in the poll stated this is due to the fact they have gone too far with their cosmetic dentistry treatments and their teeth are now too white as a result.

“It’s amazing how much we judge people by their smile. A winning grin really can open doors for anyone. What our survey found was the vast majority of people have a very similar reaction to the same celebrity smiles,” said a spokesman for the firm behind the study.

He added the results of the poll showed it was a two horse race between Willoughby and the Duchess of Cambridge, with almost everyone who took part agreeing they have nice smiles.

A report by the universities of Leeds and Central Lancashire that was published in the journal PLoS ONE found both men and women are more attracted to people who show off their white teeth than those who have a yellowing smile.

Leeds University psychologist Colin Hendrie explained a strong effect was noticed by the researchers behind the report when they were carrying out their work.