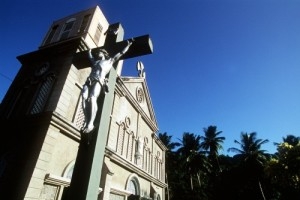 Dentists are constantly telling their patients to take good care of their teeth – it is their job, after all. You never know when your teeth are going to be on display in a photograph or elsewhere, and if they discoloured or – even worse – rotting, you’re unlikely to be proud of them.

However, a photograph is not the strangest place your teeth might end up on display. In Mexico, eight human teeth have just been found in a statue of Jesus Christ that is around 300 years old.

The ‘Lord of Patience’ statue in the parish of San Bartolo Cuautlalpan was x-rayed recently as part of a process of restoration. The restorers were shocked to discover the teeth, which had been placed in the mouth just like in real life.

Lord of Patience is already fairly unusual, standing out due to its fairly graphic, blood-soaked depiction of the Christian messiah that is covered in open wounds. However, it is now completely unique, standing as the only known statue to contain real human teeth.

There is speculation that the statue’s dental implants are relics of some kind from a holy figure in the Christian Church. However, that is unlikely according to Fanny Unikel, the head restorer at Mexico’s National Institute of Anthropology and History.

In a video, she said: “The teeth were probably donated as a token of gratitude.” Relics were usually displayed prominently in public spaces, usually in a special shrine known as a reliquary. The teeth were hidden away in the mouth of the statue with no attention being drawn to them.

Despite the fact that the teeth are several centuries old, Ms Unikel noted that they are in nearly perfect condition. This is especially impressive considering the standards of dental care 300 years ago, in a time before tooth brushing.